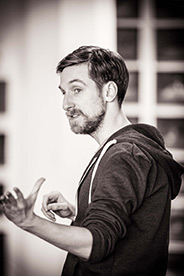 Jonathan recently directed and imagined for the stage an adaptation of ‘Reasons To Stay Alive‘ by Matt Haig. Collaborating with writer April De Angelis for Sheffield Theatres and English Touring Theatre. The production was presented in seven U.K venues including Sheffield Crucible Studio, Bristol Old Vic and Manchester Home and used text, movement and music to depict Matt’s experiences with his own anxiety and depression.

He has also brought his stage adaptation of KES to the screen with ‘Kes Reimagined‘, which premiered at the Leeds International Film Festival before a BBC FOUR Broadcast in November 2019. Working with Emmy Award winning camera director Ross MacGibbon to create a unique new dance film. Based on the novel ‘A Kestrel for a Knave’ by Barry Hines it reunites the creative team and the majority of the cast from the production that took place at The Sheffield Crucible Theatre in 2014.

For Northern Ballet Jonathan reimagined George Orwell’s modern classic 1984 as a new full length production. It went on to win him the award for ‘Best Classical Choreography’ at The National Dance Awards (Critics Circle) 2016 and ‘Best New Dance Production’ at The South Bank Sky Arts Award, 2016. The work premiered at The West Yorkshire Playhouse, Leeds in September ’15 before embarking on a UK tour including Sadlers Wells, London in May 2016. It was broadcast on BBC Four in conjunction with The Space and further made available internationally on BBC Arts Online. The production was also nominated for a Manchester Theatre Award, 2015.

Jonathan began choreographing from an early age and showed clear choreographic talent, winning the Kenneth Macmillian Choreography Competition at the Royal Ballet School, aged just 16 years old. After graduating from The Royal Ballet School to The Royal Ballet Company, he created several pieces for the Clore Studio (Switch, Refresh, Remind me and In The presence of Others). Successfully received, he was subsequently commissioned to choreograph Silent Vision and Stop me when I’m Stuck for the Linbury Studio Theatre.

He made his main stage debut in 2010 with As One, using a commissioned score by Graham Fitkin, set designs from Simon Daw, www.simondaw.com, costume design by Vikki Mortimer and lighting by Neil Austin. Following this, he collaborated on the Royal Opera House’s main stage commission, Metamorphosis: Titian 2012,working with the Turner Prize winning artist Chris Ofili, in conjunction with The National Gallery. The overall production went on to receive a South Bank Award nomination for Dance in 2013.

Jonathan made his international debut at the New York Choreography Institute in 2008 with his creation of NOW on New York City Ballet; this piece was subsequently nominated for presentation at The Linbury Studio Theatre in 2009 by The Royal Ballet. Further international commissions include Eventual Progress for Russia’s Ekateringburg Ballet Theatre, with a new orchestration of Micheal Nymans ‘Water Dances’ in 2013; Present Process for Ballet Manila, Philippines in 2014 and CRASH for Texas Ballet Theatre in 2015. He created A Northern Trilogy for Northern Ballet’s 45th Anniversary Gala and Mixed Programme, 2015 and Musance a collaboration with The Hackney Colliery Band and dancers from The Royal Ballet performed at Sadlers Wells Theatre for The Ann Maguire Gala

His far ranging artistic interests have also led to choreographic work such as; Beyond Prejudice and Free Falling created for The Curve Foundation and performed both at The Brunton Theatre and Edinburgh Fringe Festival; Abstract Balance with East London Dance, combining ‘street dance’ styles with classical vocabulary and and Together Alone for Ballet Black in 2012.

He created his first short dance film entitled Route 67 for The Slice Project in 2011, www.London-Lahore.com. He directed and choreographed Sofa and choreographed Bunker for Channel 4’s Random Acts. He also recently diversified into movement direction, collaborating on Alan Bennett’s new play, People, performed in 2012 at The National Theatre in London and the subsequent 2013 UK Tour, on The Machine for The Manchester International Festival and Park Avenue Armory in New York and Coriolanus for the Donmar Warehouse, London.